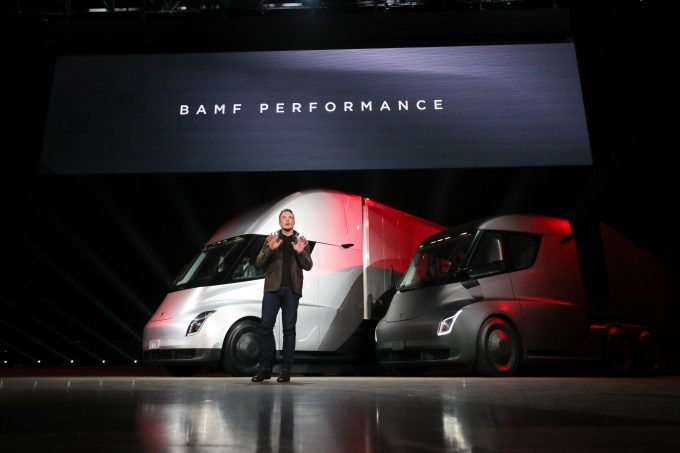 However, seemingly reliant on Tesla’s “Mega Charge network”, the Semi’s success will be determined by the extent to which its electric recharging network can be rolled out.

Leading the launch at Tesla’s California design studios was founder and chief executive Elon Musk, who described the Semi as “not like any truck ever driven”.

Offering 500 miles on a single charge, Tesla claims nearly 80% of US freight journeys, which are typically fewer than 250 miles, can be accommodated at full weight.

Mr Musk’s primary focus though was speed, he said. The Semi can accelerate from 0-60mph in five seconds, 15 seconds quicker than a diesel, and climb 5% grades 20mph faster than conventional trucks.

He said this had a notable impact on costs, with the improved climbing speed resulting in a 50% increase in what a truck could earn per mile.

On purchase prices, he remained slightly more elusive, discussing instead savings that could be achieved from a lease.

“Diesel trucking costs $1.51 per mile, but from day one, Tesla’s truck, including leasing, maintenance, insurance and fuel, will cost $1.26 per mile, in a worst-case scenario,” said Mr Musk.

“And with convoy technology [platooning], which is available now, the price of convoying three vehicles drops to $0.85 per mile – not only beating diesel but beating rail.”

Tesla declined to respond to The Loadstar’s questions on cost and claims by the BBC that the truck’s battery pack alone would cost $200,000, compared with the $120,000 average price of a diesel truck.

However, on reliability, Mr Musk made two guarantees: the Semi, which has four motors and could lose two without failing, would not break down for one million miles; and a guaranteed price-cap of $0.07 per KW/h of energy from Tesla’s solar-powered Mega Charge network, almost halving average electricity costs.

“Tesla Mega Chargers will be available anywhere in the world, and this is how we will be able to guarantee solar-powered electricity prices,” said Mr Musk.

“With one of our trucks, you will be able to drive anywhere in the world that is on our Mega Charge network.”

However, “our Mega Charge network” doesn’t really exist currently. With the first commercially available Semi expected to roll off the production line in 2019, this may have hauliers worried about how far their trucks could travel.

But Mr Musk said the Superchargers used by Tesla car owners had originated with just a couple in California and were now available “all over the world”.

Despite all the uncertainty, Bloomberg reports Michigan-based grocery chain Meijer has already ordered four trucks, paying the $5,000 per vehicle deposit, and the initial reaction from the haulage industry in Europe is positive.

Dan Cook, operations director at Europa Worldwide Group, told The Loadstar: “This is the first I have heard of a Tesla truck, and my first reaction is very positive.

“Obviously it is a few years away for the US, which I imagine means it will be a few more years on top of that until it reaches the UK, but it sounds like something which will revolutionise our marketplace.

“The cost savings on fuel sound extremely impressive. We run 100 trucks in Europe which do around 15,000km a month, so when you do the maths on what a Tesla truck would save, it sounds like these vehicles will be an extremely attractive development for the industry. Of course, this will need blending with the cost of the vehicle.

“Removing the loss in speed on inclines should also improve congestion for other road users and boost safety.”

Christopher Snelling, the Freight Transport Association’s head of national and regional policy, said: “This marks an exciting step forward in freight transport technology, as electrification will undoubtedly play a significant role in the future of logistics.

“At the moment, even an electric van costs six times as much as a conventional one, and batteries remain extremely heavy, which means electric vehicles still have a long way to go before they are a viable option for the majority of freight operators.

“It’s unlikely this new truck will address all the current operational and cost limitations. However, Tesla has been at the forefront of technological development both in transport and battery design, which means it is bound to feature some of the innovations which we will see in commercial vehicles of the future,” he added.