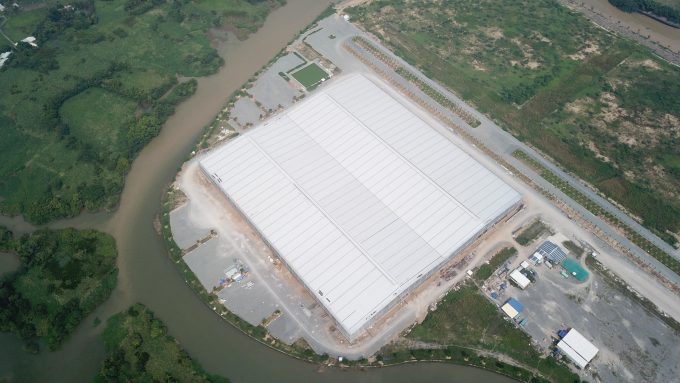 Vietnam’s TBS Logistics today opened what it claims is one of the largest warehouses in south-east Asia on Monday, highlighting the country’s record setting trade growth in 2018.

However, she said TBS is branching out from acting predominantly as a landlord, and into providing a full range of logistics services to facilitate Vietnam’s booming trade flows.

“With our strong experience in export consolidation for high volume cargoes like footwear, apparel, and furniture, TBS Logistics is now moving stronger and faster into bonded warehousing for an import or multi-consolidation model,” Ms Yen told The Loadstar.

“TBS will act as a distribution centre to enter the very high potential domestic market and develop other products such as first- and last-mile delivery, freight forwarding, and supply chain solutions.”

The new warehouse is equipped with selective and double-deep racking, with advanced seven-level rack height for nearly 14,700 pallet locations. There is a 40,000-sq metre container yard adjacent to the facility, and the entire complex is capable of handling over 500,000cu metres of cargo every month.

A tunnel connecting the site with a nearby highway was inaugurated last week, improving traffic connectivity with the surrounding industrial zones and ports, which account for around 80% of Vietnam’s container traffic.

Parent company TBS Group is one of Vietnam’s largest international manufacturing companies, producing footwear for the likes of Skechers, Decathlon and Wolverine, and handbags for Coach, Lancaster and Tory Burch.

Vietnam’s rampant manufacturing growth has shown no sign of slowing down this year. The first half saw the economy expand just over 7%, the highest since 2011, with manufacturing up 13% – the fastest in seven years. Exports surged 16% to $113.93bn, while imports were up 10% to $111.22bn.

Meanwhile, an imminent free trade agreement with the EU could boost Vietnamese exports to the trade bloc by 35%, according to some estimates.

This rapid trade growth is putting a strain on transport and logistics infrastructure, however.

“Manual operations are still commonplace, for example, with only about 15% of all logistics companies using transport and warehouse management systems.

“Transport costs are high and 70% of the truck fleet runs without back-haul cargo.

“And infrastructure is fragmented as some key projects are delayed or not yet utilised – the Ho Chi Minh City Metro, Long Thanh airport and Cai Mep port, for example,” she added.

On the other hand, she said logistics outsourcing is growing at 20% per year, creating excellent opportunities for local players.