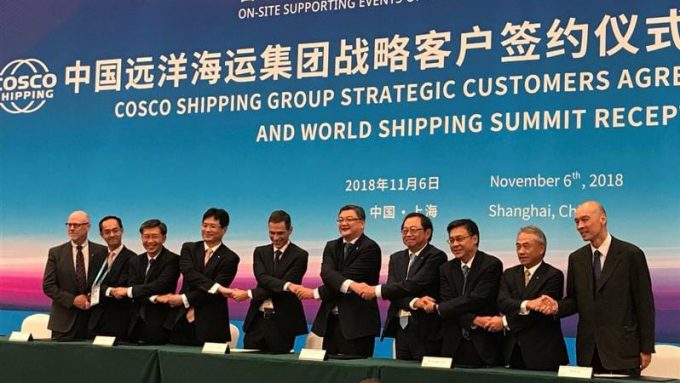 Yesterday’s announcement that five shipping lines and four terminal operators are to form a consortium to develop a Global Shipping Business Network (GSBN) has raised more questions than it answered.

GSBN will be a blockchain-enabled platform that will help digitise the industry, set standards and transform documentation flows, the companies said.

The announcement immediately drew comparison with the Maersk/IBM effort, TradeLens, which has been criticised for alienating much-needed potential partners because of Maersk’s heavy involvement.

One port source on Twitter noted yesterday: “Can’t help thinking that any line’s proprietary blockchain solution is going to struggle with universal, or even widespread, acceptance.”

Stefan Kukman, CEO of blockchain specialist CargoX, said: “Of course we are glad to see distributed ledger technology gather interest in the market, and for companies to rely on it. But seeing such initiatives, numerous questions arise. This obviously is not an independent platform, as it is created by the consortium of powerful runner-ups to the Maersk/IBM duo.

“How will private data be handled? What processes will be covered in the platform? Will it be open to other services, such as the CargoX Smart B/L(TM), for example? Will it have vendor lock-in by default, or will it enable companies to take out their private data and process it in their own way?”

He added: “If they are going to develop from scratch, such processes can take a long time, especially if specific private interests of the consortium members will need to be catered to.”

While CargoSmart failed to respond to The Loadstar, the press release confirmed that the platform would connect to other consortium networks.

It also said it would develop a “digital baseline for standards – an industry-wide common, trusted and expansive digital model provides a foundation for highly collaborative initiatives and market intelligence”.

However, further details are as yet unclear. One fear is that with various consortia looking to develop industry standards, they may not end up being industry-wide.

At the Global Liner Shipping Conference in March, Peter Wolf, general manager Germany for CMA CGM, a member of the new platform, said the only realistic way forward was a digital solution in which five to seven of the biggest lines jointly developed a platform.

And Hapag-Lloyd chief Rolf Habben Jansen, which as part of THE Alliance has yet to join a digital platform, said at the conference that although the Maersk/ IBM platform could be good, it had to be industry-wide.

“This is the weakness we’re currently seeing in many of these initiatives, as each individual project claims to offer an industry platform that they themselves control. This is self-contradictory.”

Mr Kukman warned: “This is about the digitalisation of the industry as a whole. Service and solution providers who do not open their data models, processes, and data transaction technology to other participants in the market, might do more damage than good for the whole industry, and blockchain technology specifically.

“We hope the consortium will develop in the right direction, as everybody can benefit from that. Just imagine, big systems, such as CargoSmart, TradeLens and CargoX being interconnectable, to offer smooth collaboration.”

With THE Alliance member Yang Ming involved in the new platform, one shipping observer noted: “This will add to chatter on the pressure for Evergreen to take Yang Ming under its wing.”