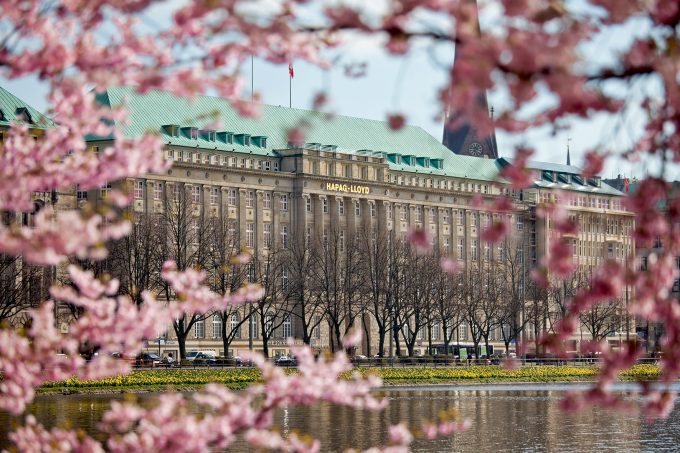 Hapag-Lloyd moved into the black in the third quarter with a net profit of $56m, but sees a big risk to profitability in the final quarter from a spike in bunker prices.

Transported volumes in the third quarter, compared with the same period of 2016, soared by 44% to 2.8m teu – a result of the integration of UASC – mainly gained on Asia and Middle East trades.

During an earnings call this morning, chief executive Rolf Habben Jansen said that, on a like-for-like basis excluding UASC, liftings were ahead around 7% in the quarter.

Revenue was up 52% to $3.3bn, but there was no detail on what percentage of this increase was attributable to the UASC business.

However, Hapag-Lloyd’s average freight rate remained stubbornly depressed, at $1,065 per teu, representing just a 4% improvement on the previous year, which was explained by the carrier as the result of UASC’s lower rates.

By comparison, in Q3 Maersk Line reported a 14% year-on-year uplift in its average rate and OOCL 20%.

As justification for maintaining UASC’s lower rate levels, Mr Habben Jansen explained that “it was the priority to hang onto volume in any merger”.

As a consequence of the positive third-quarter result, Hapag-Lloyd returned to the black for the nine-month period, recording a cumulative net profit of $8m.

“The biggest risk factor in the fourth quarter is the bunker price,” said Mr Habben Jansen. He explained that although fuel price increases could be passed on to customers, there was always a delay factor in obtaining compensation.

Indeed, Hapag-Lloyd paid 29% more for its fuel this year than in the third quarter last year, $308 per tonne, and over the nine-month period the increase was even higher, at 47%.

Since the completion in May of the takeover of UASC, integration remains ahead of schedule, with the final commercial steps taking place before the year end.

Around 70 – unspecified Hapag-Lloyd or UASC – offices around the world have closed as a consequence of the merger and a restructuring cost of $82m has been included in the nine-month accounts.

Mr Habben Jansen said the expected cost savings of $435m a year would come through in 2019, but hoped “80-90%” of that would be achieved next year.

He said he was “cautiously optimistic that spot rates would recover in the lead-up to the Chinese New Year”, having seen “some softening” at the end of the third quarter.

And on the renewal of Asia-Europe contract rates, Mr Habben Jansen confirmed that the first tenders were out and, although it remained “early days”, he said the first signs were “encouraging” and was confident deals would be closed at a higher level than last year.

Mr Habben Jansen said he remained relatively unconcerned about the supply-demand implications of the new mega-ship orders by CMA CGM and MSC, given that most of them would not hit the water until 2020. But he was encouraged by the “responsible attitude” of Maersk and the Japanese carriers towards newbuild orders and reiterated that Hapag-Lloyd “does not plan further investments in new vessels”.