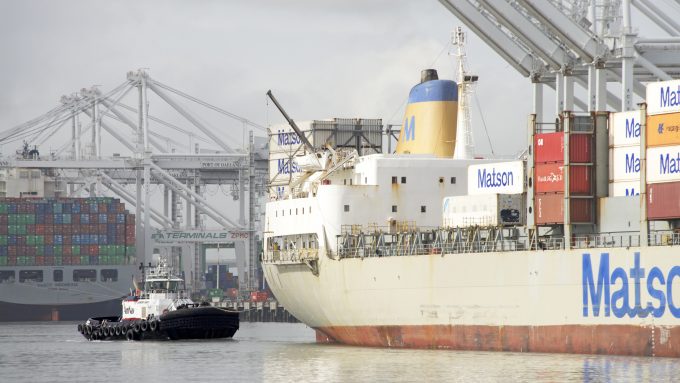 US shipping line Matson reaped the benefits of offering a premium transpacific container shipping service, reporting a 15% increase in box volumes over the second quarter of 2016.

Chairman and chief executive Matt Cox explained that the increase, which saw second-quarter liftings at 34,000 teu, compared with 29,400 teu in the same period of 2016, was largely due to demand from shippers for faster transpacific transits as well as congestion-free operations at its US west coast terminals.

“For the balance of 2017, we expect our proven service to be highly differentiated with a service advantage over the international carriers in the transpacific.

“Longer-term, we view the consolidation of international carriers and reformulation of the new alliances in April as potential sources for market improvement in the China trade,” he added.

However, the period was not without its problems: its largest trade remains US mainland-Hawaii, which saw volumes decline 2.8% year-on-year, to 73,200 teu, largely due to a slowdown in the state’s construction sector.

Matson has two 3,600 teu LNG-powered – the so-called Aloha-class – container vessels under construction at Philly Shipyard, due to be delivered in the third quarter of 2018 and the first quarter of 2019, and Mr Cox poured scorn on reports that another line had placed orders for vessels destined to enter the Hawaii trade.

He said the shipyard had not announced any other firm vessel orders, and “we believe that adding new or incremental vessel capacity to a market that is well served by existing capacity of encumbered operators today is uneconomic”.

Mr Cox added: “As you may know, our primary competitor in Hawaii has announced the selection of a shipyard in Texas to build two new vessels that will address its fleet renewal needs. And the severe losses experienced over time in Puerto Rico and transpacific tradelanes provide examples of the detrimental impact that overcapacity can have in this business.”

The mainland US-Hawaii trade remains regulated by the Jones Act, which means all vessels serving it must be operated and owned by US companies, employ US crew and be built in the US – which explains the $200m-plus price tag commanded for each of the newbuilds.

Volumes also fell on Matson’s Alaska services, by 1.1% to 35,000 teu, “primarily the result of continued energy sector related economic contraction [which was] partly offset by a better seafood harvest and related southbound volume”.

However, the weaknesses in its cabotage trades were offset by a doubling of revenues in its terminal joint venture with SSA in Tacoma, while its logistics arm saw net income jump from $2.2m last year to $6.9m in the second quarter of this year, due to the acquisition of freight forwarder Span Alaska.