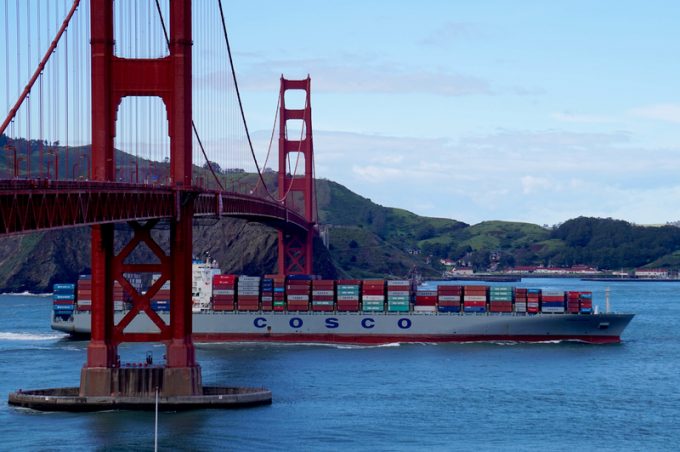 The Ocean Alliance is facing a profound network shake-up as its members prepare to welcome a large tranche of ultra-large containership (ULCV) capacity next year.

Yesterday saw the unveiling of the 2018 service network for its members, Cosco, CMA CGM, Evergreen and OOCL.

While its rivals – the 2M and THE alliances – have relatively modest and well-established orderbooks for the largest class of box ships, the Ocean is set to see the make-up of its respective fleets undergo radical change, according to liner consultancy SeaIntel.

It said: “2M and THE Alliance essentially have a very stable development. This means that the phase-in of new deliveries will primarily be used to augment existing services, reducing unit costs on these by having a few more ultra-large vessels deployed.

“However, the Ocean Alliance is set to grow its fleet of ultra-large vessels by more than 60% in 2018, and this is heavily front-loaded towards the early part of the year.

“This in turn means that Ocean Alliance [members] – if they wish to optimise their changing fleet portfolio – need to rethink the fundamental structure of their current network,” SeaIntel said.

Yesterday’s provisional schedule for 2018 will see the Ocean Alliance go from a current total of 41 east-west services deploying 331 vessels amounting to 3.35m teu, to 42 services with 340 vessels (3.6m teu).

It will continue to be the largest grouping serving transpacific trades, with 20 services between Asia and the west and east coasts of North America – nine into Southern Californian ports, four to the Pacific north-west and seven to the east coast.

The transatlantic TAE2 is the new string, which the partners said would offer improved transit times on a port rotation of Southampton (trial call 2 cycles)-Le Havre-Antwerp-Rotterdam-Bremerhaven-Charleston-Savannah-Miami-New York-Southampton.

However, SeaIntel warned that with the influx of new ULCVs – especially into the fleets of CMA CGM and Cosco, which will take over OOCL next year  – shippers and forwarders should be ready for some serious changes to these services.

SeaIntel CEO Alan Murphy added: “Shippers should prepare themselves for a 2018 wherein the network structures of 2M and THE Alliance are likely to undergo only smaller modifications, but we will see Ocean Alliance potentially change the network more drastically, offering new products and network structures, driven by the rapid delivery of large vessels.”

According to its fleet data, 108 box ships of over 14,000 teu will be delivered in 2018, “which is essentially a doubling of the number currently in operation, leading to more than 200 ultra-large vessels being deployed by the end of 2018”.

And CMA CGM appeared to acknowledge this challenge yesterday when it advised that “evolutions” were expected from April next year.