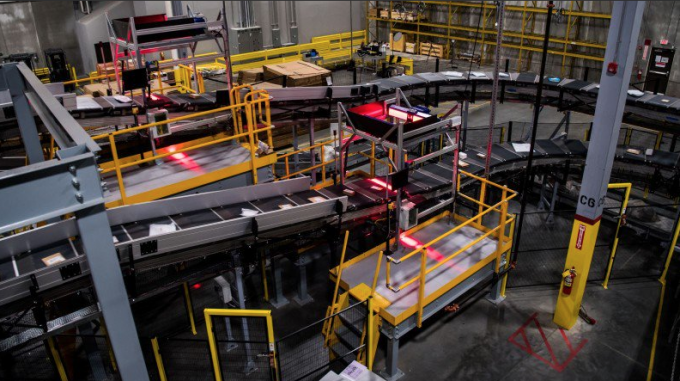 DHL expects its new e-commerce facility in New Jersey to be the bedrock for growth in its B2C delivery division over the next decade.

Located in Avenel, the 200,000 sq ft facility has capacity to process 40,000 shipments an hour, some 60% more than an equivalent-size non-automated facility.

Scott Ashbaugh, head of operations, DHL eCommerce US told The Loadstar the centre would be absorbing volumes from neighbouring facilities along the US east coast, including Baltimore and Boston.

“This is significantly bigger than our old site and has been built to absorb the volumes we expect to generate over the next decade,” he said.

“By the time we hit capacity here, we expect to have adapted and upgraded the other facilities, which will then be operating under the same custom-built automated systems.”

The facility became fully operational on the first weekend of November, in time for the pre-Christmas peaks of Black Friday and Cyber Monday.

While the company already operates 18 dedicated e-commerce sites, this is the first with a fully integrated automation system.

“What you see at the old sites is a combination of automated facilities – including sorters – that have been brought in and made to work,” said Mr Ashbaugh. “Here, we have an entirely automated system that is fully integrated into one unit – and it has more to give with cross-border services operating out of here later this month.”

“Looking ahead, we are planning to roll out further facilities using this system with Los Angeles up next, followed by Cincinnati,” he added. “We may be handling half a billion shipments annually by the time we hit capacity here. In the recent peak period we were processing 250,000 shipments per day.”

Among its other features, the system is equipped with new cross-belt conveyer sorting and automated barcode scanning, allowing for higher speed and more throughput.

Although the company’s e-commerce division is already operating, it will be recognised as a unique and reportable division from January. A spokesperson for DHL told The Loadstar: “This facility will very much fall under the remit of that division. It should also act as an indication of where we expect to go in as far as catering to online commerce and the B2C market.”

The facility cost a reported $20m and expectations are that when it comes to LA the cost may be even higher.

As far as beyond LA and Cincinnati, chief executive of DHL E-Commerce Americas, Lee Spratt, said that when it comes to rolling out other facilities it is not simply a case of retrofitting.

“You need a floor plan for this sort of thing – the automated system we have – and we look where we want to be based on the location of USPS post offices,” said Mr Spratt.

“In New Jersey, there are post offices everywhere but that isn’t the case everywhere, so in Atlanta, for example, it may be harder because people are more spread out.

“We have to ask whether to build infrastructure and try to put people in it, or put the infrastructure where the customers are, and this is what we are considering now.”