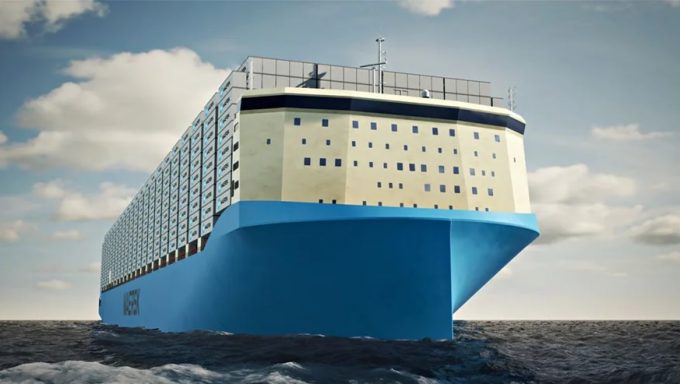 Maersk has exercised options for an additional four 16,000 teu dual-fuel methanol ships for delivery in 2025, but says the supply of green methanol for them remains uncertain.

The options follow a last-August order for eight of the revolutionary, green-fuelled vessels with the South Korean yard of Hyundai Heavy Industries (HHI) for delivery in Q1 24.

Analysts at Ship & Bunker have calculated Maersk would need to source some 280,000 360,000 tonnes of green methanol a year for this fleet, adding: “Assuming the four additional ships have the same fuel needs, that requirement will rise to 420,000-540,000 tonnes.”

Posting to LinkedIn yesterday, Maersk board member Capt Thomas Lindegaard Madsen said it was “no longer a matter of if or when we will see the carbon-neutral vessels, but a matter of getting enough fuel for them”.

“We certainly have a challenge to scale-up production of green methanol for our growing fleet,” said Mr Sterling. “And we need the board to be positive towards these investments.”

He claimed that once fully phased-in and running on green methanol, the 12 containerships would generate savings of 1.5 million tonnes of CO2 emissions a year.

“Not only will these ships represent a significant step in our decarbonisation journey, they will also enable us to offer decarbonised shipping to our customers on a completely different scale than today,” said Mr Sterling.

Meanwhile, CMA CGM, which is on a different track towards decarbonising its fleet, has inked a new deal with Finnish technology group Wärtsilä to supply dual-fuelled auxiliary engines, propulsion control and fuel gas supply systems for its latest series of 12 LNG-fuelled container vessels. The equipment is scheduled for delivery to the yards this year, with the first ship stemmed for launch in Q3 23.

Hakan Agnevall, president and CEO at Wärtsilä Corp, said: “Both CMA CGM and Wärtsilä have a common strategy in applying LNG solutions to prepare the way towards carbon-free shipping.”

CMA CGM said it expected to have 44 LNG-fuelled ships in its operating fleet by 2024. VP of its ship management subsidiary, CMA Ships, Xavier Leclercq said: “The choice of dual-fuel gas vessels powered by LNG for our new ships is part of our commitment to build a zero-carbon future.”

Meanwhile, LNG bunker prices more than trebled in the final six months of last year, from $750 to $2,500 per tonne, but have now retreated to around $1,800 a tonne.