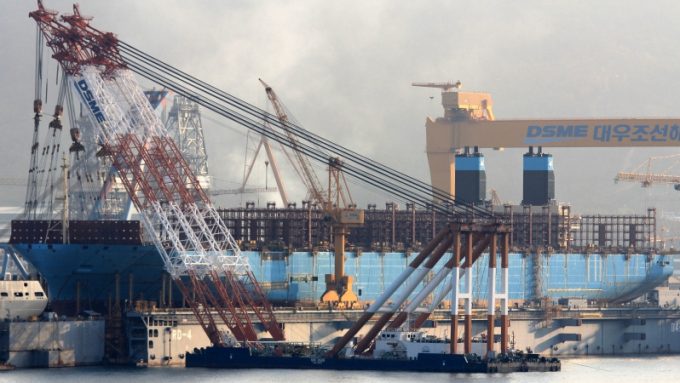 Maersk Line’s 11 second generation Triple-E class vessels, due to be delivered from April next year through to May 2018, could become the first containerships to break the 20,000 teu barrier, according to Alphaliner.

From images taken of the Madrid Maersk at the DSME yard in Okpo, South Korea, the consultant believes the ultra-large vessels could have a “notably higher capacity” than the official 19,630 teu capacity rating.

“First images from the shipyard suggest that Maersk Line has extensively modified the design of the ships to further increase container intake,” said Alphaliner.

Alphaliner said the main change from the original design was moving the bridge two bays forward and the engine room and funnel section one bay aft.

Thus, the container intake is increased under deck as well as on deck, due to improved visibility from the bridge.

Furthermore the engines are lighter, improving deadweight limitations, having been downsized from eight to seven cylinders.

Otherwise, the second-generation Triple-Es will have the same dimensions as their predecessors: a length of 399 metres and a beam of 58.6 metres, which accommodates 24 bays of containers across the weather deck.

The new ships will be deployed within the 2M’s Asia-Europe network and be at the front line of the battle for unit cost supremacy against the rival vessel sharing groupings of the Ocean Alliance and THE Alliance.

Cost leadership continues to be a key strategic priority for Maersk Line and in its recent third-quarter results, the carrier recorded a 13.8% reduction in unit costs, on the same period of 2015, although that this was largely driven by a 20% drop in bunker costs.

However, a 16% decline in Maersk Line’s average rate per teu tipped the carrier to a $116m net loss for the period, despite aggressive growth of 11% in its liftings.

“Our priority has always been to have the lowest cost so we can be comfortable with weak freight rates,” said Maersk Group chief executive Soren Skou last week.

Mr Skou claimed load factors on the carrier’s ships were “at record highs” which had been “driven by Hanjin” and was confident that Maersk could hang on to most of its gains.

He said the carrier wanted to grow market share organically, and as a result Maersk Line would add a “little more” capacity than the market growth.

Meanwhile, Alphaliner noted that both MOL (THE Alliance) and OOCL (Ocean Alliance) were scheduled to receive 20,000 teu ships in the first half of 2017 – part of a massive 1.7m teu of cellular capacity that is stemmed for delivery next year.