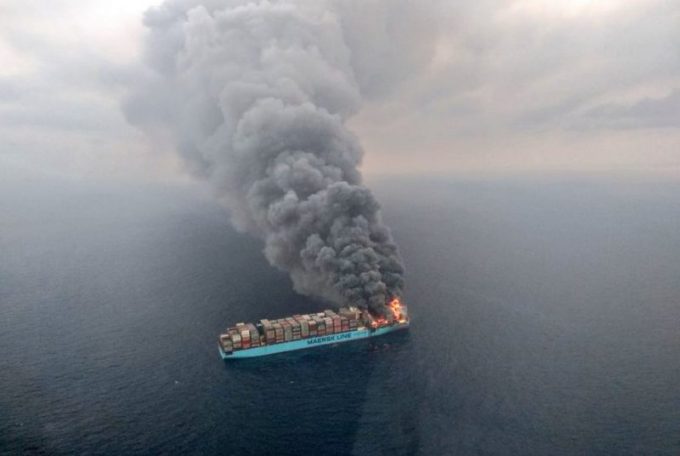 Maersk Line has announced it is deploying new guidelines for the stowage of containers on its vessels.

And it wants the International Maritime Organization (IMO) to review its guidelines for the handling and carriage of dangerous goods.

The move follows a wide-ranging review, carried out in conjunction with classification society American Bureau of Shipping (ABS), following the fire on the Maersk Honam this year, which resulted in five crew members losing their lives.

While the results of authorities’ investigation into the incident have yet to be released, Maersk said that, although the vessel was “was carrying dangerous goods in the cargo hold where the fire originated, however at this time, there is no evidence to suggest that dangerous goods caused the fire”.

Ole Graa Jakobsen, head of fleet technology at Maersk, said: “All cargo aboard Maersk Honam was accepted as per the requirements of the International Maritime Dangerous Goods (IMDG) code and stowed onboard the vessel accordingly.

“Despite this, as the fire originated in a cargo hold in front of the accommodation, which held several containers with dangerous goods, it had an unbearably tragic outcome.

“This clearly showed us that the international regulations and practices with regards to dangerous goods stowage need to be reviewed in order to optimally protect crew, cargo, environment and vessels,” he added.

Today the world’s largest container carrier announced it had implemented a new set of principles, Risk-based Dangerous Goods Stowage, which has identified six different risk zones on a box vessel.

And it has changed its stowage philosophy accordingly.

It said cargo covered under the IMDG code would no longer be stowed next to accommodation and main propulsion plant, which it defined as “the zone with the lowest risk tolerance”.

“Utilising statistics on container fires in the Cargo Incident Notification System (CINS), Maersk defined which UN numbers can be stored in each risk zone,” it added.

The new principles have been submitted to the IMO and Denmark’s Maritime Authority, and Maersk is seeking to establish an industry-wide review, “aimed at creating best management practices for dangerous goods stowage will be undertaken with participation from ABS, Lloyds Register, the International Group of P and I Clubs, National Cargo Bureau, the TT Club and Exis Technologies”.

It said it would also seek input from the other carriers that contribute to CINS, which comprises most of the world’s major shipping lines.

“Containership fires are a problem for our entire industry and we intend to share and discuss our learnings from this thorough review within relevant industry forums,” Mr Graa Jakobsen added. “We very much believe that discussions, views and insights among container carriers can further improve fire safety in our industry.

“We aim for long-term improvements by reviewing our systems and then designing an end-to-end process that is safe for our seafarers and smooth for our customers.”