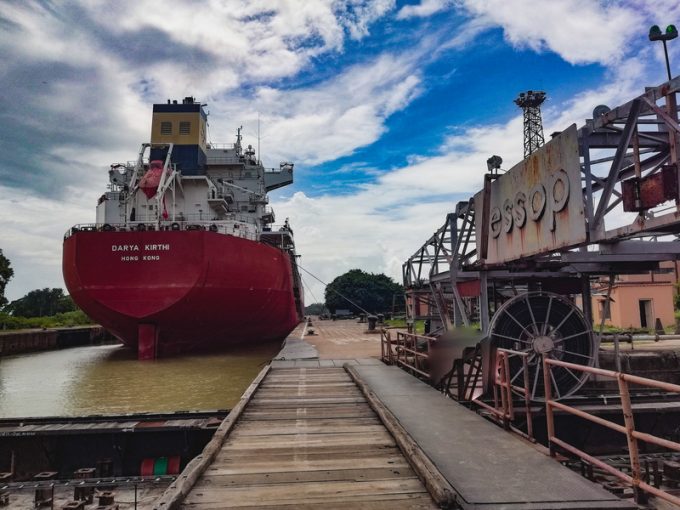 India’s government and logistics operators are looking to barges to bring down the cost and improve the routing of domestic cargo.

Promoting the use of barges was welcomed by the Federation of Freight Forwarders Association in India’s Debashis Dutta.

“Inland waterways offer the cheapest form of internal transport, and government is motivating companies to use this over road and rail,” Mr Dutta told The Loadstar on the sidelines of this week’s FIATA World Congress in Delhi.

“We have a lot of waterways here and we are beginning to see more shipments make use of them, particularly in oil and materials markets.”

One of the most prominent use of barges has been by Indian east coast stevedore Ripley & Co, which has used them to reduce load weights allowing ocean-going vessels to dock at Haldia Port.

General manager Golden Sinha told The Loadstar this operation was made possible by installing two floating cranes at Anchorage Point in the Bay of Bengal in December.

“Haldia has a draught restriction, preventing vessels carrying more than 40,000 tonnes entering,” said Mr Sinha. “We use the cranes to partially unload onto barges and then both ship and barges bring the goods into port.”

Mr Dutta said that while the use of barges had been increasing, there were still areas that needed to be addressed to take full advantage of the potential offered by the country’s river system.

One particular problem is the low draught of many of the waterways, although Mr Sinha said there were also developments in this area.

“Flat-bottomed barges would make the use of the wider network more realistic, with the Ganges for instance having a restriction of 3.5 metres,” Mr Sinha added.

“Such vessels are now under construction, and when made available we would look at acquiring some, as they would allow more to be handled.”

North Europe’s beleaguered barge sector appears to be “without hope”, as it struggles to deal ...

Congestion is on the rise again across Northern Europe’s inland waterways, leaving shippers scrambling to ...