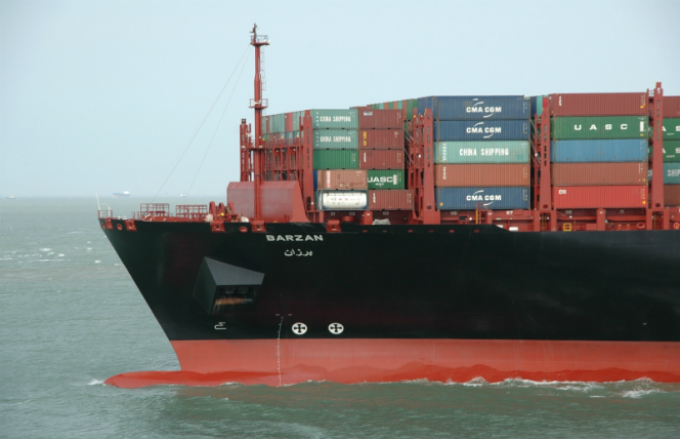 The European Commission yesterday approved the merger between Hapag-Lloyd and UASC – subject to the latter withdrawing from the North Atlantic trade.

A Hapag-Lloyd spokesman told The Loadstar the company was “delighted” with the news.

With a combined capacity of 1,478,236 teu, the merger will make the new entity the fifth-largest ocean carrier, well ahead of Evergreen, at 991,470 tea, and marginally behind China Cosco Shipping, which has a capacity of 1,572,335 teu.

An EC statement said: “The clearance is conditional on the withdrawal of UASC from a consortium on the trade routes between Northern Europe and North America, where the merged entity would have faced insufficient competitive constraint.”

“The commitments offered by Hapag-Lloyd ensure that the takeover will not lead to price increases on the routes between Northern Europe and North America.”

By its withdrawal from the consortium and the termination of UASC’s weekly North Atlantic NEU1 service, the EC said the merged entity’s position on these trades “will be comparable to that of Hapag-Lloyd today”.

The EC said that although UASC could continue to operate within the North Atlantic consortium during the notice period, to “guarantee an orderly exit”, a “monitoring trustee will ensure that no anti-competitive [element] is shared”.

The EC also concluded that the acquisition by Hapag-Lloyd of UASC presented “no competition concerns” on other shipping trades, nor had an impact on container terminals, inland transport, freight forwarding or harbour towage – “in particular because several other service providers are active in these markets”.

The deal will see UASC’s shareholders – the Dubai-headquartered firm is 51% opened by Qatar Holdings and 49% by the Public Investment Fund of Saudi Araba – take 14.4% and 10.1% ownership of Hapag-Lloyd (see chart below). 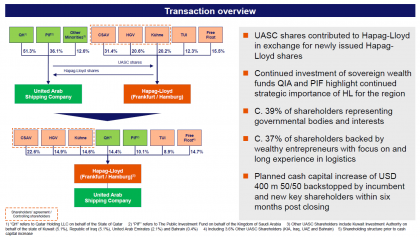 Earlier this month, Hapag-Lloyd chief executive Rolf Habben Jansen said the German carrier wanted to close the merger deal before the end of the year and then “move ahead very swiftly”, with a six-month target for the integration of the UASC business.

Mr Habben Jensen said, during the company’s third-quarter financial presentation on 14 November, that the rationale for the merger was improved scale, providing access to UASC’s “young and fuel-efficient fleet” of 61 ships, including ULCVs.

He explained that to be competitive, Hapag-Lloyd would have needed “significant investment” in ULCVs, but with UASC’s fleet of six 18,000-teu and eleven 15,000-teu ships, there was now no need. Fleet expenditures had “basically been pulled forward”, he said.

He estimated that synergy savings from merging the container lines would be $435m a year from 2019.

The majority will come from network optimisation and reduced overheads, including the consolidation of corporate and regional headquarters, the rationalisation of country organisations and overhead reductions such as operations, marketing and audit.

At the end of September, Hapag-Lloyd had 9,397 shore-based and seafaring employees. At the time of its takeover of CSAV’s container business, the combined head count was over 11,000.