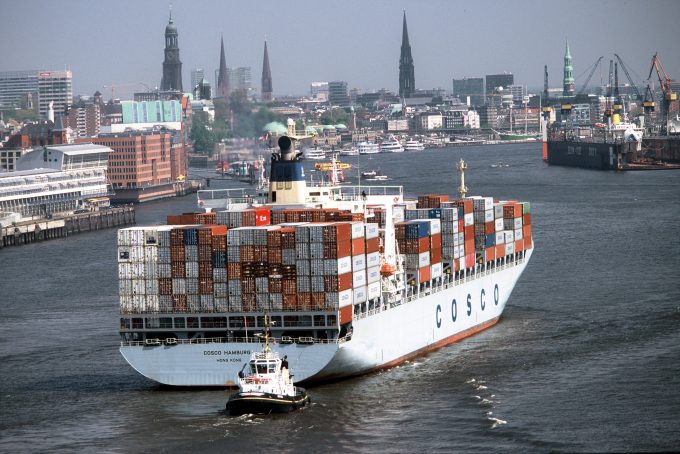 The arrival of more 20,000 teu-plus megaships has resulted in “a steady shift of market share” from Germany’s hub gateway container port of Hamburg to western neighbours Rotterdam and Antwerp, and, to a limited extent, Wilhelmshaven.

The latest Global Port Tracker for North Europe is projecting a 5.1% decline in container imports for Hamburg in the first quarter of this year, compared with the same period of 2018.

Hamburg is yet to publish its final throughput figures for 2018, but at the nine-month stage the total volume handled at its River Elbe container terminals was 2.4% down on the previous year, at 6.6m teu.

Moreover, Rotterdam and Antwerp saw their throughput numbers jump 5.7% and 6.8%, respectively, during the same period.

The monthly report, compiled by Hackett Associates in conjunction with the Bremen Institute of Shipping Economics & Logistics (ISL), suggests the long-awaited commencement of the deepening of the Elbe may have come too late to stop the two Benelux ports gaining a vice-like grip on Hamburg’s traditional hinterland.

ISL’s Sonke Maatsch said that during previous quarters Global Port Tracker had recorded “a steady shift of market share away” from the German ports of Hamburg and Bremerhaven to Rotterdam and Antwerp, although there had been some business that had transferred to the new deepwater port at Wilhelmshaven.

“Due to their geographic location, the German ports are seldom the first call on intercontinental liner services, so some of the vessel’s import cargo is already discharged,” said Mr Maatsch.

This, he said, meant the incoming vessels would have a draught of some one-to-two metres less on their arrival in Germany, after lightening their load. But, “this is still too much” for the 20,000 teu-plus ULCVs, argued Mr Maatsch.

“First, we saw transhipment move from the German ports to Rotterdam and Antwerp, so the Asia services could still call in Hamburg or Bremerhaven,” said the analyst, “but recently we see an increasing number of ships turning in Antwerp and Rotterdam.”

Although carriers cannot afford to omit the German ports altogether, Mr Maatsch noted that the alliances were increasingly using transhipment or “interlining strategies to avoid the need to call there with every line”.

He said: “Once more the liner operators have set the bar higher for ports,” adding that even after the Elbe is dredged to a “tide-independent draught of 13.5 metres”, this would still some way shy of the maximum draught of the latest ULCVs: around 16 metres.

“The competitive disadvantage will be weaker, but it will not disappear completely,” suggested Mr Maatsch.

Meanwhile, the port of Hamburg is more optimistic about the draught available for navigation of the River Elbe after the deepening, putting the figure at 14.5 metres (although this includes one metre for a flood tide) and has calculated that ships calling would be able to transport 1,600 containers more than currently.