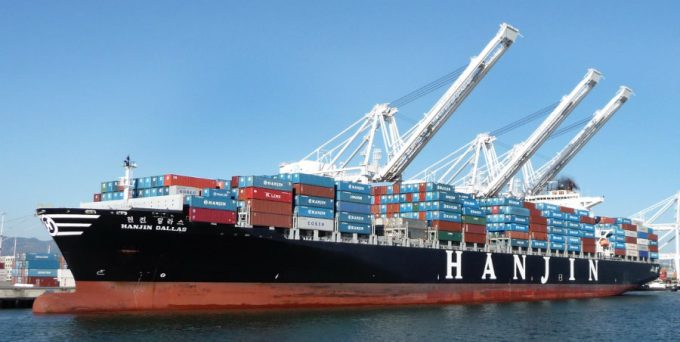 Brokers are reporting good news for embattled containership owners this week in the container charter market, with a big rise in enquiries and improving daily hire rates.

Shipping consultant Alphaliner said that, after recent increases in interest in larger vessel  sizes, “demand is now filtering down to the medium-sizes, suggesting that a more sustainable recovery could be on the way”.

Indeed, one London broker told The Loadstar this week: “For the first time in months, owners have the upper hand”.

Much of the surge in chartering activity of 7,500-11,000 teu, very large containerships (VLCSs) has been attributed to ocean carriers preparing for the launch of the new east-west alliances next month.

Alphaliner reports that OOCL, which is leaving the disbanding G6 alliance to join CMA CGM, Cosco and Evergreen in the Ocean Alliance, has been especially active in that sector.

The carrier chartered eight units in February, including two former Hanjin-chartered ships of 10,114 teu from Greek owner Danaos – for four months, with options, at $13,000 a day – three newbuild 11,000 teu vessels from Costamare and another ex-Hanjin-operated 10,000 teu ship from Seaspan.

Alphaliner understands that four will be deployed with OOCL’s own 8,000 teu tonnage on the Ocean Alliance’s NEU1 Asia-North Europe loop, until the carrier receives its 21,000 teu newbuilds later in the year.

Brokers are struggling to find VLCS tonnage for willing charterers and, as a consequence, rates have spiked. For example, Alphaliner reports the 8,073 Conti Cortesia has been fixed on a 12-month charter with MOL at $11,500 per day. This compares with the market rate a few weeks ago of $8,000 for a similar period.

Nevertheless, the VLCS segment still has a long way to go to get back to the $30,000 daily rates of January 2015 before the charter market collapsed.

Large containerships (LCSs), previously known as ‘overpanamaxes’ before the canal’s expansion, are also in demand, according to Alphaliner.

“Charter rates are beginning to rise sharply, especially for the highest-specification LCSs,” it said.

LCSs are also being reactivated from lay-up, with the number of units seeking employment down to 13 from 19 a month ago, according to Alphaliner data, and brokers are seeing rates firm up after a big increase in enquiries in this sector.

Even the beleaguered owners of panamax containerships are seeing a long-overdue improvement in their fortunes.

According to one broker source, a combination of aggressive scrapping, with some owners taking advantage of a surge in demolition rates, as well as a demand cascade from the larger sizes, has seen daily hire rates for classic panamax ships jump from a rock bottom $4,000 a day to $7,000-$8,000 for young vessels.

If the charter market rally continues, it will be a massive boost for shipowners who will not only see their ships employed at profitable rates, but also see the value of their assets increase, thanks to their improved earning potential.