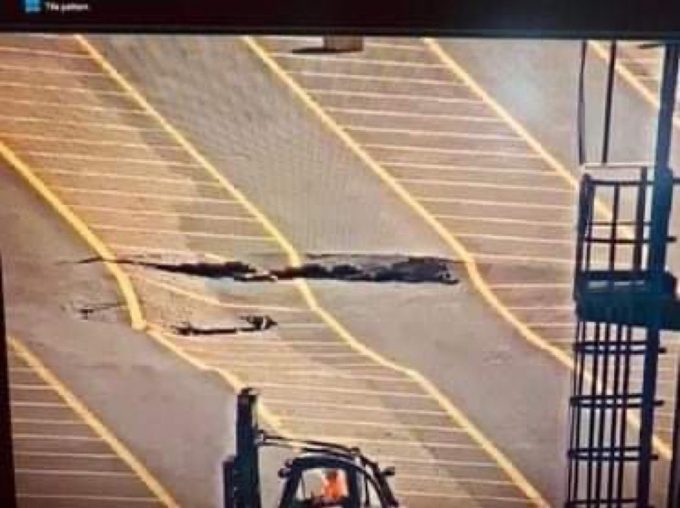 Felixstowe Port is finding new ways to sink into the mire, first with extra charges on import containers, to offset the increase in costs for energy, causing anger amongst importers, then a sinkhole appeared at Terminal 6.

The UK port provoked the ire of some in its shipping community with its decision to implement an ‘energy adjustment levy’ of £11.25 ($14.73) on all laden import containers through the port from 1 May.

The move is in response to soaring energy costs and the removal on 1 April by the government of the 80% lower duty on the so-called red diesel used in off-road vehicles and machinery.

“I accept they need to recover some of these costs, but it is the shippers that are getting stung again,” said a Felixstowe-based forwarder. “Surely they should be looking to the carriers to cover these extra costs?

“Every day I see how much money the carriers are making, and they just don’t know what to do with it, buying anything that moves, so why can’t they pay this from the ridiculously high rates they are charging us?” he said.

Meanwhile, a provisional assessment of the sinkhole that appeared on the quay at Trinity Terminal is that it “should be a quick fix” and not lead to too much disruption.

A Felixstowe-based contact told The Loadstar this morning the cavity on the berth at Terminal 6 of the port’s main facility did not appear to be related to the dredging works to deepen the water alongside.

“The sinkhole is not too bad,” he said, “the port is just waiting for the civil engineers to advise, but it should be a quick fix”.

Earlier in the week, a port spokesperson told The Loadstar its engineer consultants were investigating the cause of the sinkhole, but wouldn’t elaborate.

If the easy repair is confirmed, it will be a huge relief to the Hutchison-owned port, which recently improved its quayside and landside performance, prompting the return of a direct call on the 2M Alliance AE7/Condor Asia loop this month.