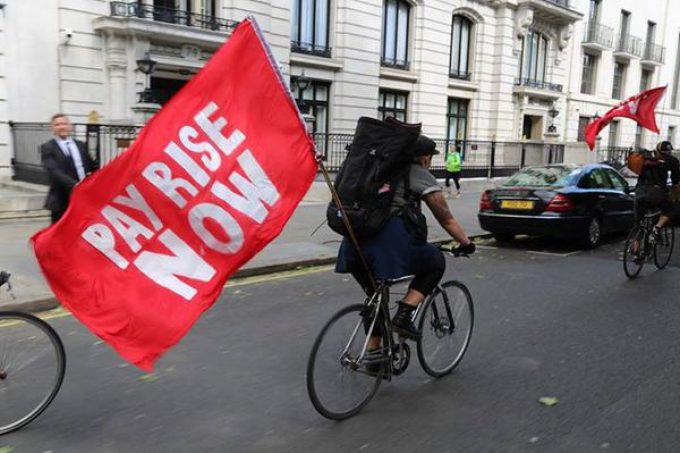 A bicycle courier has won her legal fight to be recognised as a “worker” by CitySprint, after the judge described the firm’s employment practices as “contorted” and “indecipherable”.

Maggie Dewhurst took the London-based same-day courier service to court in November to gain recognition as a “worker” rather than an “independent contractor”.

While both are classifications of self-employment, “workers” are considered integrated within a business to such a substantial degree that they deserve basic employment rights such as paid holiday and sick leave.

Judge Jo Wade described CitySprint’s business model as “window-dressing” and wrote in her judgment: “It is CitySprint which has the power to regulate the amount of work available, and it keeps its couriers busy by limiting the size of the fleet.”

The case also found that if CitySprint allowed its couriers to subcontract – a fundamental right for “independent contractors” – it would be in breach of its contract with health care supplier HCA International, which forbids the practice.

In paragraph 56, Judge Wade concluded that “any concept of her [Ms Dewhurst] operating a business is a sham”.

Ms Dewhurst, who chairs the couriers and logistics branch of the Independent Workers of Great Britain union (IWGB), said the tribunal showed CitySprint’s operation to be wilfully exploitative and fuelled by an “absurd set of incentives”.

“The reality of a courier’s working life has been exposed. It’s a tough, physically and mentally demanding job, in a low-pay sector – we are not high-flying entrepreneurial executives.

“CitySprint and its rivals have been using the excuse that their couriers are entrepreneurs for many years, but this was found to be an artificial construction and that couriers are in a subordinate position.

“It doesn’t matter how long they’ve been playing the game like this, their time is now up,” she said.

A CitySprint spokesperson told The Loadstar it was disappointed by the ruling and that it would be reviewing the judgement in detail.

“This case has demonstrated that there is still widespread confusion regarding this area of law, which is why we are calling on the government to provide better support and help for businesses across the UK who could be similarly affected,” said the spokesperson.

The firm also claimed the ruling applies to a single individual and argued that it did not represent a test case, a claim refuted by a spokesperson for the International Transport Workers Federation (ITF).

“There is no question about it, it is a test case,” the ITF spokesperson told The Loadstar. “It is impossible to see it as anything else.”

CitySprint tried to fight the case by claiming its couriers enjoy many freedoms, such as flexibility and high pay, a claim described by IWGB general secretary Jason Moyer-Lee as “laughable”.

“This was just about the most laughable claim of the entire case, and is illustrative of CitySprint’s ruthless attitude towards its hard-working couriers,” said Mr Moyer-Lee, who argued that CitySprint’s own witnesses failed to demonstrate either flexibility or high pay.

“Simon Baker, head of fleet and compliance at CitySprint, asserted that couriers may expand their businesses by bribing staff in loading bays in order to be allocated more work,” he added.

Mac Urata, inland transport sections secretary of the ITF, told The Loadstar this was the latest ruling to “challenge the emerging model that seeks to paint workers as self-employed freelancers for their employers’ benefit”, more commonly known as the gig economy.

“And it’s a model that needs to be challenged: it too often deprives workers of their basic employment rights, as well as undercutting regulation that has been built up to protect the wider public,” said Mr Urata, who compared the case to the similar decision three months ago by the London Employment Tribunal concerning Uber drivers.

ITF president Paddy Crumlin said the Uber judgment had “torn away the mask of driver independence” that Uber had assiduously cultivated.

“In Copenhagen, New York, London, Paris, Brussels and beyond – with more cases certain to come – the challenges are being heard and the courts are making clear that workers deserve workers’ rights.”

DHL Express has finally bypassed a problem that held back the roll out of its Cubicycle system ...

ZH: ADP employment beats as manufacturing jobs surge most since 2012

ZERO HEDGE writes: “With the government finally reopened, this Friday brings the much-watched “data” that ...

More trouble appears to be on its way for courier firm Hermes and the increasingly ...

UK cities are facing “considerable” challenges in air quality and congestion as a result of ...