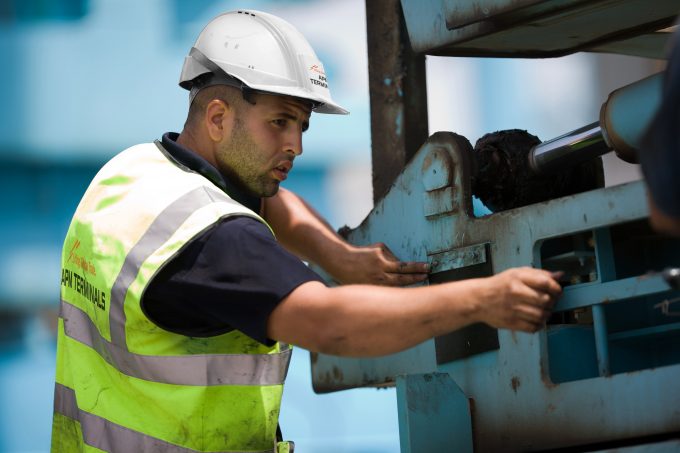 Maersk’s decision to pay a premium $4bn for Hamburg Süd was influenced by the integration and cross-selling strategy of its umbrella Transport & Logistics (T&L) division.

This will not only see Maersk Line add 600,000 teu of capacity to its fleet, but additionally the German carrier’s container volumes will, where possible, be handled ‘in-house’ at APM Terminals facilities around the world.

Mr Skou said there would be a “significant change of direction” for APMT over the next couple of years. The focus would be on costs and maximising APMT’s current terminals, “much less, or not at all, on planting new flags”.

“We have invested a lot [in APMT] now is the time to fill the capacity that we already have,” said Mr Skou.

And instead of the arms’ length carrier customer-terminal operator relationship that has hitherto existed between Maersk Line and APM Terminals, Mr Skou said in future major hub ports would operate as “a one-company business”, he suggested, in a similar fashion to how UPS and FedEx operate their global distribution centres.

He added that other crossover synergies between the other T&L brands; 3PL Damco; container manufacturer MCI (Maersk Container Industry); and towage and salvage specialist Svitzer would all be exploited.

There will also be cross-selling between the brands, said Mr Skou. “We reach out and touch thousands and thousands of businesses each year and we can do a better job of cross-selling.”

Maersk Line has accepted that it is likely to lose some Hamburg Süd customers as a consequence of the takeover and has learnt some painful lessons from the chaotic 2005 acquisition of P&O Nedlloyd, when one-plus-one did not equal two in terms of customer retention – or even one and a half.

“In container shipping, acquiring another carrier comes with a loss of volume,” he said, “minimising that loss is a key value driver when it comes to making decisions.

“We believe that a great customer experience is part of the solution.”

Mr Skou also confirmed during his presentation that Maersk Line would not be investing in new ships “in the foreseeable future.”

He said: “The focus of the future Maersk will be on global container shipping, container logistics and container ports.”

However, he added, there was much work to do to bring the T&L division back on track: the cumulative segment result for the nine months to 30 September was a net profit of $117m, compared with a profit of $2.1bn for the same period of 2015.

Meanwhile, as it charts its new course as a integrated transport and logistics operator, Maersk has given itself 24 months “to find solutions” for its oil and oil related businesses, which could include joint ventures, mergers or disposals.