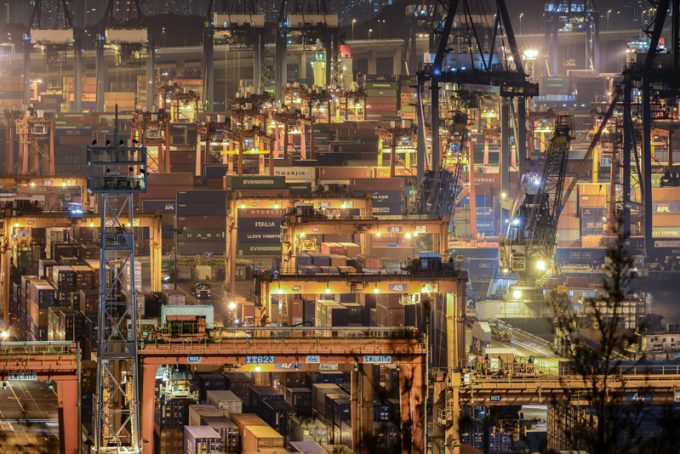 Neil Davidson, senior analyst at Drewry’s ports & terminal practice, said yesterday that more M&A activity, “both operationally and financially”, was desirable to match that of its liner customers.

Mr Davidson was presenting Drewry’s Ports and Terminals Quarterly Review and in its assessment of the new east-west alliance networks launching in April, Mr Davidson expected “limited further impact” to North European ports, although he noted that THE Alliance was still to confirm its UK and Baltic hub ports.

He said that disruption at container terminals since the introduction of ULCVs was “starting to level off”, and he thought the “ceiling” had been reached on the size of newbuilds at around 20,000 teu.

“Ship sizes are not going up in leaps and bounds as before,” he said, given that the extra port costs were beginning to negate the unit cost reduction of the larger vessels.

However, Mr Davidson was concerned at the unrelenting cascading of displaced tonnage since the introduction of ULCVs, with ever-larger vessels being squeezed into smaller trades and into terminals not equipped to efficiently handle them.

He expected that there would be more deals, such as that sealed recently at the port of Miami between neighbouring terminal operators SFCT and POMTOC, which have signed up to the Miami Marine Terminal Conference Agreement, receiving the regulatory blessing of the US Federal Maritime Commission.

APM Terminals, which holds a 49% stake in SFCT, told The Loadstar that the problem of “one continuous berth and no room to grow” was the catalyst for the agreement designed to “find new ways to better use both the container terminals” to serve larger ships and larger shipping alliances.

“These larger vessels and larger alliances create pressure on port space and productivity at a time when few port operators are prepared to invest hundreds of millions in new ports and port upgrades,” said an APMT spokesman.

Nevertheless, Mr Davidson said, there was “still room for a well-run small operation” in the port and terminal sector that could compete for niche business.

Meanwhile, on the subject of transhipment, Mr Davidson said it was “difficult to say” whether it would increase or decline as a result of the new alliance structures.

He said the deployment of ultra-large ships should, in theory, lead to fewer port calls and more relay traffic; but on the other hand he noted that alliances were still making multi-port calls in North Europe, which he believed would continue as long as there was an abundance of tonnage and low bunker costs.

And there will be no shortage of containerships in the immediate future. According to the latest data from Alphaliner, some 1.69m teu of new capacity is stemmed for delivery this year.

It is forecasting the industry will create another new scrapping record, 750,000 teu, this year and that 250,000 teu due for delivery will be postponed to next year, but there will still be a capacity growth of 3.4%, creating “havoc”, and “hampering any substantial rise in containership charter rates”.