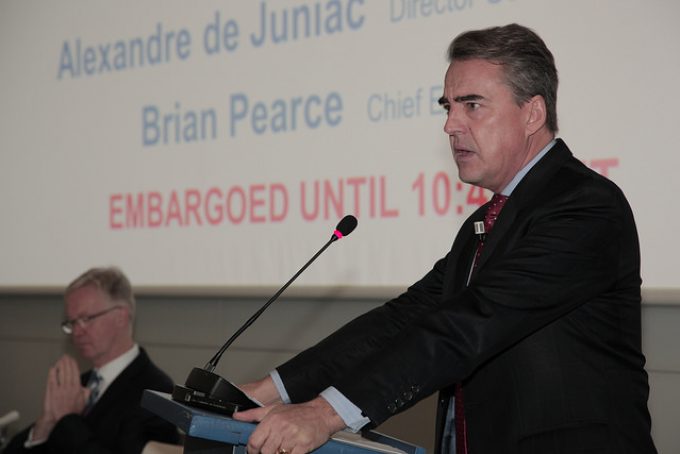 Favourable one-off incidents and improving performances across European economies caused airfreight to outperform global GDP in 2016, with that growth forecast to continue into 2017.

“At the end of the year we are expecting GDP to post its slowest rate of growth since the global financial crisis, but for airfreight the story has been completely different,” said Mr Anjaparidze.

In total, IATA expects 53.9m tonnes to have been carried by air in 2016, representing more than a third of global trade by value – equivalent to more than $5trn.

“The association expects this momentum to continue into 2017, and has forecasted a record high volume of 55.7m tonnes, fuelled by 3.5% growth in demand and a break in falling yields.”

Industry revenues are also expected to rise to $49.4bn, but IATA noted that this would still be well below the $60bn level experienced between 2010 and 2014.

Director general and chief executive of IATA Alexandre de Juniac said governments did not make aviation’s work easy, with billions of dollars wasted in direct costs and productivity lost as a result of inefficient infrastructure.

“However, global airfreight markets look set to end 2016 on a high note, with demand growing at its fastest pace in 18 months,” said Mr de Juniac.

“It remains to be seen how long this growth trend will endure after the year-end peak period – we still face headwinds from weak global trade. But there are some encouraging signs.”

Mr Anjaparidze said that in addition to one-off factors impacting results – eg, the collapse of Hanjin Shipping and shippers suddenly finding themselves reliant on air transport to meet demand for a stronger-than-expected peak – broader points of growth had been noted in October.

“Additionally, there is strong growth in developing economies, and we witnessed an upturn in performance out of Asia-Pacific in the latter half of 2016.”

This stronger demand for imported Asian goods in Europe has translated to greater growth for not only European, but also Asian, carriers, said Mr Anjapridze.

Earlier this week, IAG Cargo reported double-digit growth in exports out of India, to both European and US markets. Volumes rose by 15% between August and October and were up 41% year-on-year in October.

The US and the UK are key destinations for freight departing India, with commodities including printed and packaging materials, clothing and household goods.

“Not only have we seen an increase in consignments being carried, we’ve also seen increases in the average weight of those consignments.  This strong start to the peak is being driven, to a significant extent, by the cross-border growth of e-commerce which has meant a corresponding rise in the need for express shipments.”

Mr de Juniac pointed out that, in addition to the strong peak, research from purchasing managers suggested that there would be a pick-up in export orders.

However, Mr Anjaparidze also cautioned that the longevity of this growth was in doubt as the world awaits the outcome of Brexit alongside the financial policies of the new US administration.

“However, overall I remain positive on expectations for 2017,” he continued.

Mr de Juniac concluded: “Growth in 2017 would represent eight years in the black for the industry.”