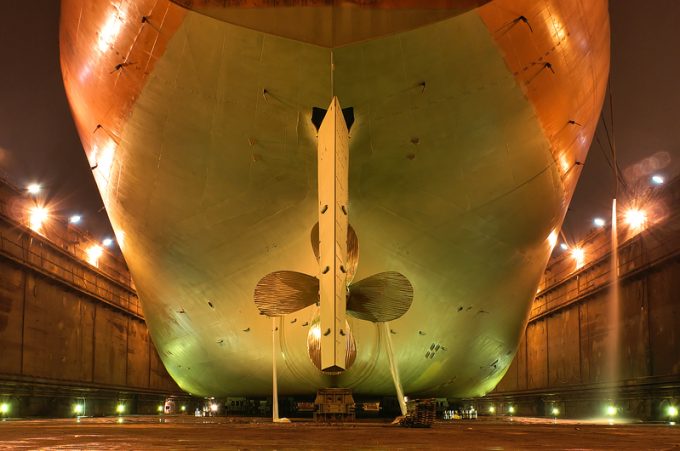 More carriers may join Cosco and Yang Ming in exerting pressure on Asian shipyards to defer the delivery of newbuild ultra-large container vessels (ULCVs), scheduled to hit the water before the end of June, until the second half of the year, or even into 2019.

That was the view expressed by ClipperMaritime consultant Neil Dekker during a presentation to launch the transportation and analytics division of New York-headquartered ClipperData in London last week.

Both Cosco and Yang Ming have postponed the delivery of ULCVs from this year until 2019 – in Cosco’s case, it will now receive only half of the 14,000 teu-plus vessels planned for this year.

Mr Dekker said that although it would very much depend on the individual contracts, he thought carriers could use their immense buying power to persuade embattled yards to postpone deliveries.

He added that pushing back the ULCV deliveries would greatly improve the cashflow of the container lines, given that they would be able to defer their commitment to make final stage payments, which could be as much of 25% of the total cost, into the next financial year.

The three alliances are scheduled to receive 32 ULCVs of 15,000 teu and above between now and 30 June, equating to some 1.2-1.3m teu of additional capacity to the global fleet.

The majority of the newbuild ULCVs – 18 ships, 11 due for first-quarter delivery and seven in the second – are due to be received by the members of the Ocean Alliance.

Meanwhile, 2M partners Maersk Line and MSC are due to receive four ULCVs and THE Alliance members expect just three in the first half of this year.

Both the Ocean and THE alliances will commence new service structures in April, which in the case of the former could be used to soak up the additional capacity – but it is unlikely that the other two groupings would accept any market share loss.

Indeed, ClipperMaritime posed the question: “How will the 2M react?”

Analysts warned that if left unchecked the deliveries would “exert genuine pressure on market fundamentals” and result in a “potentially ruinous” cascade of 10,000-13,000 teu into secondary trade.

And, according to the latest demolition report from London shipbroker Braemar ACM, so far this year only one 3,800 teu vessel has been scrapped, compared with 25 ships (75,500 teu) by the same point in 2017.

With the charter market rejuvenated and the idle tonnage fleet now numbering less than 100, it is unlikely that scrapping levels will reach anywhere near last year’s 152 ships for 432,500 teu, potentially throwing the tonnage supply side even further out of kilter with demand.

Summing up market trends, ClipperMaritime said market volatility was “still here” and that some tradelanes “remain in trouble”.