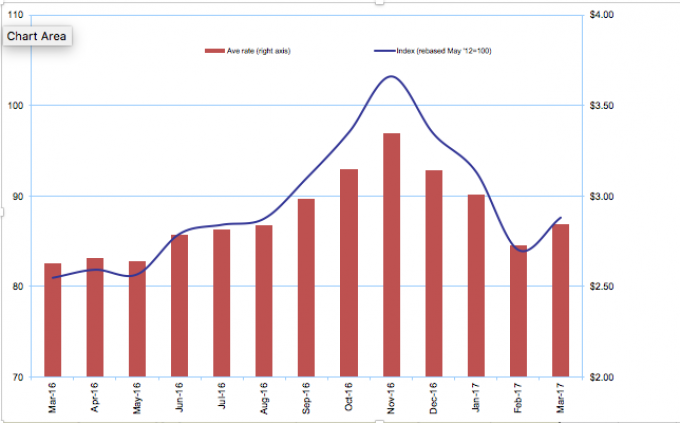 The numbers have risen again: air freight rates enjoyed a 4% month-on-month rise in March, to $2.84 – an increase rarely seen at that time of the year.

As Drewry released its latest East-West Airfreight Price Index, forwarders, shippers and airlines all support the evidence that volumes have been reasonably good so far this year – although one forwarder told The Loadstar that last week had seen some overcapacity out of China to Europe, which could result in weaker rates.

But, at 8% higher than last year, last month’s all-in rate reflects a rebound – although nearly 7% lower than in March 2015, reflecting how much the market sank last year.

Transpacific eastbound was the strongest lane, up 18% year-on-year to $3.74, an 8% rise over February, while transpacific westbound saw rates fall 6% from February, to $1.67, or 1% down year-on-year, said Drewry.

But the indicators continue to be good. Semi-conductor sales have continued to rise, for the seventh consecutive month, and, said IATA, demand for silicon materials has also risen.

Inventories have also shifted in a way that favours airfreight: there has been a sharp fall in inventory-sales ratio in the US over the past nine months.

As IATA noted: “A large fall in this measure has traditionally been associated with a pick-up in airfreight as firms rush to restock their inventories.”

Meanwhile, airlines have reported that product launches are now no longer confined to the fourth quarter and perishables are in year-round demand.