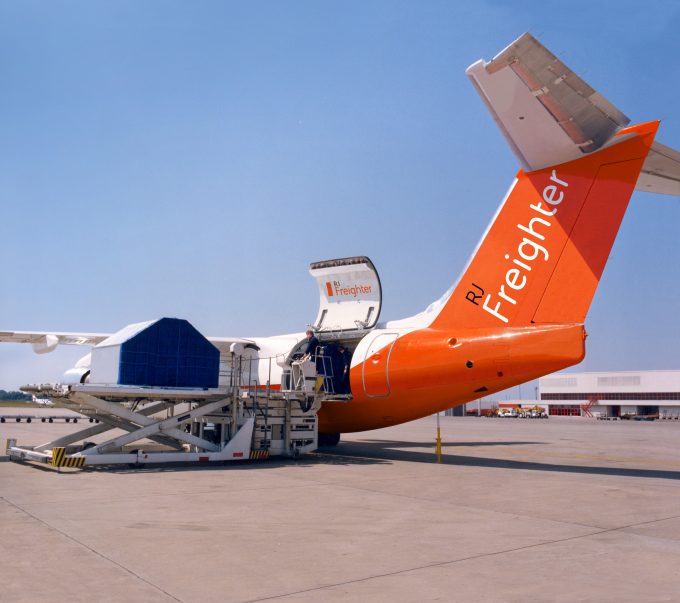 It may be the end for the 747 freighter – but at the other end of aircraft sizes a new opportunity is opening up.

BAE Systems Regional Aircraft is considering launching a freighter version of its Avro RJ regional jet, and is asking the industry about likely demand.

The UK manufacturer is eyeing a conversion programme for the RJ100, which is starting to come out of passenger service. There are some 130 aircraft in active service currently.

The aircraft can be bought for about $1m-$1.5m, while BAE estimates that the freighter kit and conversion would amount to $2.2-$2.8m.

The aircraft would be able to carry up to 14 tonnes of cargo, and the range would be, for the extended version, up to 2,500 nautical miles.

BAE argues that it is significantly cheaper than a 737, but has up to 60% more hold volume and floor area than a turboprop, and can operate more flights per day. In addition, the aircraft can operate in remote locations with unpaved or narrow runway access.

“The RJ is an ideal solution for airline start-ups and those who are growing their operation from props to jets. The STOL [short take-off and landing] characteristics and unsealed and narrow runway performance generally would certainly suit remote operations in mining and humanitarian relief roles.”

Although BAE has not formally contracted an MRO partner, it is planning the initial conversions at Prestwick, where its engineers are based. “We believe that having our engineers in close proximity to the conversions lends itself to minimising the associated risk.”

It has bought back tooling from Romania, where the ill-fated BAE146QT conversion programme was based – which saw just two aircraft modified.

Unfazed by this, BAE said it “would seek to incorporate all the learning from [that experience]”.

“Fundamentally it really comes down to price – the cost of the asset and the cost of the conversion.  A good quality RJ100 can be picked up for between $1m – $1.5m, that’s a lot of aircraft for the money. If we can launch the programme with an order book of 10 or more aircraft then we can start to generate economies of scale in terms of kit manufacture and learning thus keeping the conversion costs to a minimum,” BAE said.

The manufacturer will not put more of its own money into the venture, however. “It is not our intention to fund the programme beyond what already has been committed. We would require interested parties to commit to the programme by way of non-refundable deposits to initiate a full industrial programme.”

However, it said three or four operators and lessors have already shown interest. It needs an order book of 10 aircraft to launch – and is now working on that.

“Time is of the essence as aircraft are being retired as operators re-equip. We would wish to have the first conversion completed in the fourth quarter of 2017 and anticipate the first aircraft would take through the programme in around nine months. Working back from these dates we would anticipate a go/no go decision circa November 2016.”

You can find more information here. While the air cargo industry waits to see how the three-cornered  airport system puzzle at ...

Shippers and forwarders needing the latest airline information regarding flights to China can now use ...

Atlas Air subsidiary Titan Aviation has entered a joint-venture with Bain Capital Credit to develop a ...

In a surprise move, Amazon has contracted a low-cost leisure carrier to operate 10 converted ...

ATSG sees heightened potential to offer services to e-commerce companies in Asia through its A321 ...

Booming air freight exports to US a logistical headache in Vietnam

Vietnam’s booming exports to the US are causing a logistical headache for freighter operators as ...

Lufthansa wants to take a more flexible approach to bellyhold cargo with its narrowbody Airbus ...

Cathay Pacific Cargo has lifted its embargo on lithium-ion battery shipments after introducing a fire ...

In a bid to be profitable, Lufthansa Cargo has responded to the soft air freight ...