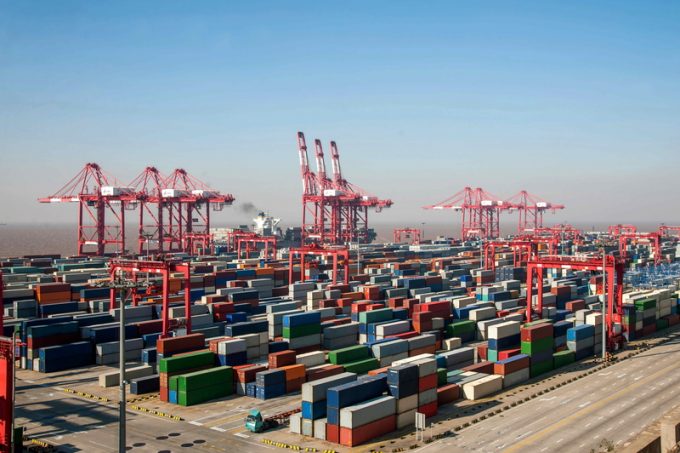 The traditional seasonal slump in Asia-Europe container freight rates could be avoided this year, as carriers prepare to pull huge amounts of capacity from the trade via void sailings.

According to container freight pricing platform Xeneta, carriers will this week reduce capacity by 33% on the westbound Asia-Europe trade, with full capacity reduced next week by 43% capacity,. There will be a further 8% reduction the week after that.

“This means container lines are taking stronger measures to try and keep rate levels up, which makes a distinct difference with this period normally. Rates traditionally slide in the aftermath of Chinese New Year.

“This year, however, there is a stronger chance rates will stay at the levels we have seen recently, and may even go up.”

The implication for long-term contracts on the trade is a big variation in rate levels, said Mr Berglund.

“Normally one would see contract rates across the trade cluster around a given level, but this year the spread is so wide that we have become very cautious about making any sport of predictions as to what would be an average Asia-Europe annual contract rate level,” he said.

Xeneta has also seen a change in the timing of long-term contract negotiations between carries and shippers on the route, with both reluctant to put pen to paper until the overall picture on where rates are heading becomes clearer.

“A lot of people have yet to sign contracts on the trade, and we think they will continue to resist until they see what the situation is after the next few weeks.

“The result is that for some companies the cycle of contracts appear to have permanently shifted from January to December, to March to February.

“We are seeing some companies signing annual contracts in February, March and April, while others are signing contracts at the same time, but which are only valid until the end of 2017.”

However, in the contracts that have been signed, Mr Berglund says he has seen a much greater emphasis on the seasonality of the trade, which has followed IT investment by carriers.

“If a shipper can provide stable volumes during the slacker periods of the year then they will get very good rates, but during the peak seasons when demand is higher and their own volumes increase they can expect to pay higher rates on the extra containers,” he added.

However, given that this is the container shipping industry, there is always a chance that rates could plummet, especially if carriers decide to bring more capacity back, or one or more breaks ranks on the current pricing discipline to go for market share.

According to today’s Container Insight Weekly, published by Drewry, one of the chief reasons why capacity was so dramatically cut in recent months was the bankruptcy of Hanjin.

“An immediate impact could be seen on the containership idle fleet, which surged after Hanjin’s demise when 98 ships, with an aggregate capacity of around 610,000 teu suddenly were left without employment. The idle fleet went from 904,000 teu in mid-August to 1.7m teu in mid-November,” it said.

However, some of that capacity has begun to seep back into services. Just four vessels amounting to 15,000 teu have been scrapped, while some 31 ships have re-entered service, Drewry noted.

“Only one of those ships that found new operators was previously owned by Hanjin, the 4,275 teu Hanjin Durban (now KMTC Chennai). Non-operating charterers such as Danaos, Kmarin, and Seaspan have managed to find replacement lessors for 30 ships so far, presumably at considerably lower daily charter rates than Hanjin was paying,” Drewry said.

The impact of these smaller vessels on the Asia-Europe deamand-supply situation is likely to be muted, given their smaller size.

More important have been the moves by Maersk Line, which has chartered 11 former Hanjin vessels amounting to 77,000 teu. Two of these are the 13,000 teu Hanjin Africa and Hanjin Harmony that were sold at auction by HSH Nordbank to unnamed buyers in December for $127.5m and $137m respectively, according to vesselsvalue.com data.

Drewry added that Maersk had deployed the vessels on the 2M Alliance Asia-Europe services and renamed them Maersk Emerald and Maersk Ensenada.

“There remain some 63 ex-Hanjin ships, with close to 460,000 teu worth of nominal capacity, that are parked up. These include Hanjin Europe, one of the three 13,092 teu units sold in December by Peter Döhle Schiffahrts-KG, which was originally listed as Hanjin-owned. Six sisterships with similarly opaque ownership will be auctioned next month,” Drewry said.