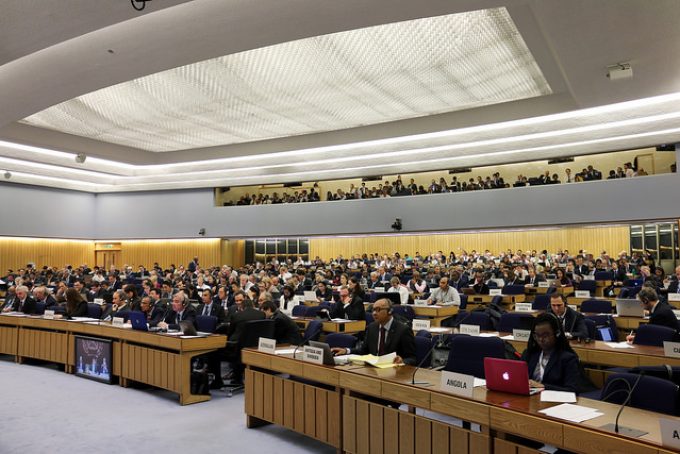 Environmental groups and European politicians have rounded on the International Maritime Organization (IMO) over its apparent failure to address shipping’s CO2 emissions.

While the UN body resolved to move ahead with more stringent sulphur oxide (SOx) emission regulations last week at the annual meeting of its Marine Environmental Protection Committee (MEPC), as reported by The Loadstar, it took a far softer line with CO2 emissions.

It ruled only that vessels of 5,000gt and above – about 85% of the world’s fleet – will have to collect consumption data on type of fuel used.

A statement from the IMO said: “The new mandatory data collection system is intended to be the first in a three-step approach, in which analysis of the data collected would provide the basis for an objective, transparent and inclusive policy debate in the MEPC.

“This would allow a decision to be made on whether any further measures are needed to enhance energy efficiency and address greenhouse gas emissions from international shipping. If so, proposed policy options would then be considered,” it added.

The decision was slammed by environmental lobbyists and European politicians.

According to lobby group Transport & Environment, shipping is set to account for 17% of global transport emissions by 2050, and it argued that “efficiency improvements are being blocked by keeping efficiency and emissions data secret”, with the IMO confirming that the collected data will be kept confidential.

“The IMO’s decision this week to delay by at least a further seven years any agreement on reducing greenhouse gas emissions from shipping constitutes an abject failure by national governments and the shipping industry.

“The IMO first established a work plan on GHGs in 2003, but this week it decided to create a fresh process for yet more talks – betraying the Paris agreement’s call for urgent action to limit global warming at 1.5/2°C,” a statement from the organisation said.

And MEP Jytte Gutland argued that the EU should press ahead with its own ship emission regulations.

“The shipping sector must play its role in Europe’s transition to a low-carbon society. But time is of the essence and, in the absence of IMO action, the EU must include ships’ emissions in its 2030 climate target.

“By setting up a climate fund for shipping, Europe can help industry cut CO2 in a cost-effective way.”

“Calls to dump transparency from the EU system need to be firmly rebutted. The EU must provide citizens, ports and shippers with quality data on individual ship energy performance if market forces are to play a role in decarbonising the sector.”

However, the IMO road map was welcomed by shipowner representatives, who argued that “CO2 reduction from shipping is a global challenge which can only be solved meaningfully by global agreement not at regional level”, and criticised calls for the EU to develop its own regulations ahead of the IMO findings, due in 2023.