News / Air cargo market 2019: 'a cause of concern' for carriers, says WorldACD 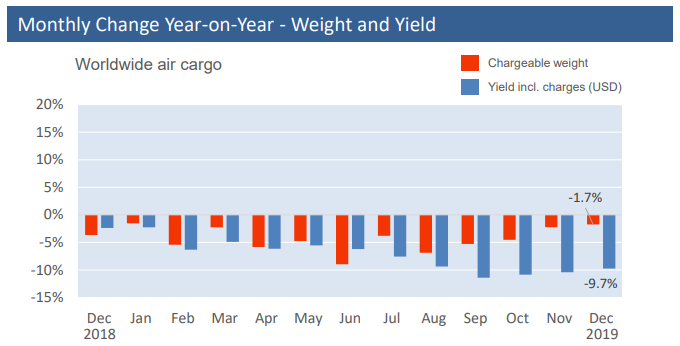 There’s enough going on this year already, without worrying about the past – but, if you are still wondering what happened in air cargo in 2019, the results are finally out.

WorldACD has reported that worldwide revenues dropped by a depressing 11.7% compared with a year earlier.

And not even the good stuff bore sufficient fruit: pharmaceuticals and vulnerable goods, including hi-tech, while showing 8.5% growth in volumes, also saw yields drop.

“A cause of concern for the airlines,” noted WorldACD.

Europe was hit the hardest. Revenue (in US dollars) fell 16%, with Germany alone accounting for half of the decline. Outbound was a bit better, both in Europe and Asia Pacific, but the opposite was true for North America.

“Many have attributed (part of) the disappointing 2019 results for air cargo to the worsening US-China relationship, but trying to establish where the consequences of the trade war were felt most is not all that easy,” noted the analyst.

Total China inbound volumes fell 6%, but China outbound increased by 2.7%. Year-on-year in total increased by 2.8% to Europe and dropped by only 0.3% to the US. The report does note that some ex-China traffic went via Japan, slightly distorting the numbers.

There was some sunshine in December though. Hi-tech and other vulnerable goods were up 13.3% from a year earlier, while pharma and temperature-controlled goods rose by 12.6%. In perishables, flowers did best (up 3.5% year on year), but fruit and vegetables suffered (down 7.9%).

You can read the full results here, and yields here.

Virgin Atlantic has announced “drastic measures” as it battles to cope with the slump in ...

More passenger flight suspensions have created a capacity crunch for intra-Asia air cargo, and as ...

The most-up-to-date and reliable capacity utilisation data for air cargo is to be shared with ...