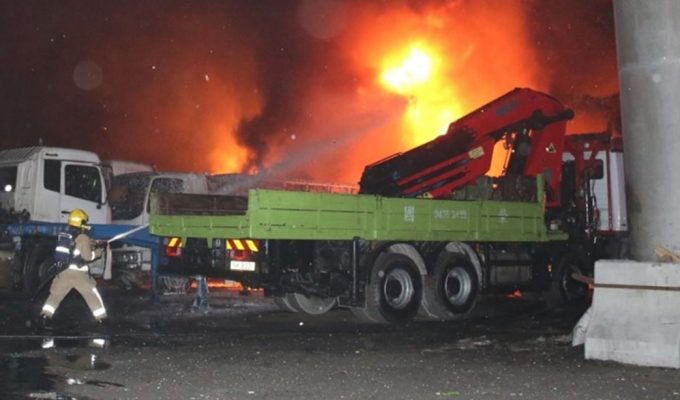 More than a dozen heavy goods vehicles in the vicinity of Hong Kong’s Kwai Tsing container terminals were damaged this morning in a suspected arson attack.

Residents called the police after hearing what sounded like multiple explosions from the open-air parking lot at Container Port Road, accompanied by raging flames and bursts of smoke.

Firefighters arrived with 10 fire appliances and, using water and foam jets, took just under an hour to put out the fire which had engulfed 12 HGVs, one medium goods vehicle and a trailer. No one was hurt and no evacuations were required.

Hong Kong Fire Services Department said, “An initial investigation found a suspicious cause behind the fire. The case has been handed over to police for investigation.”

HK01.com reported that some of the affected vehicles were badly burned and towed away.

It is the second fire near the Kwai Tsing terminal in just over a month. On 10 March, some foam boxes on Container Port Road South burst into flames, which were extinguished in 15 minutes and did not cause any damage or injuries.